For my exploration of astronomy as part of my free inquiry, I wanted to look at some of the myths surrounding the constellations. Myths are relevant to me as both a future English and Social Studies teacher- I recently completed a project that involved a myth based legend for a Comparative Cultures 12 class.

In the western world, the myths we associate with constellations come predominantly from Greek mythology. I took at a look at the myth behind the constellation Cancer (just because it’s my star sign). The myth behind Cancer the Crab is part of the story of the Greek hero Hercules and his twelve labours. It describes how Hera sent the crab to grab Hercules by the heel and distract him from his task of fighting a Hydra, but Hercules crushed the crab under his other foot. Zeus then placed the Crab into the sky to commemorate Hercules’s victory and remind Hera of her failure. 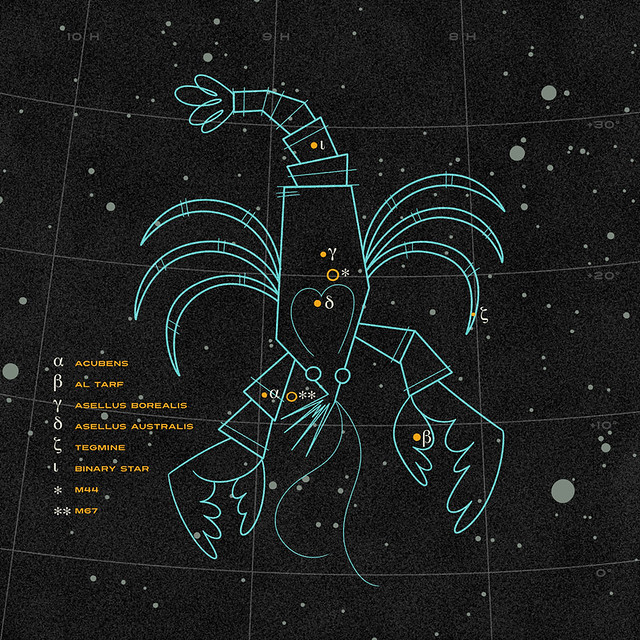 The Native American myth tells the story of how starts came to be. It tells of a world where there were no stars, meaning that the “animal people” struggled to find their way in full darkness and went to their creator for help. The creator tells them to collect sharp stones which could be made into stars. A coyote was asked to help smaller animals make pictures in the sky with these stones, but the coyote was not helpful and some of the pictures were incomplete. The story says that the coyote howls because he never finished his own picture and he is filled with regret.

Comparing these two myths give some context for how we might understand astronomy and myths about it differently depending on cultural lenses. In addition, without even looking for particular formats, the first resource I found for a Greek constellation myth was written, while the first resource I found for an Indigenous myth was a recording of an Oral  story, which reflects how each type of story would likely have been told.

Theme by Anders Noren — Up ↑